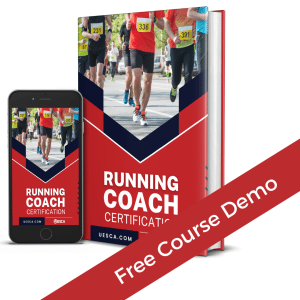 The UESCA Running Coach Certification is the most comprehensive running certification on the market. The science and evidence-based content is curated from top experts across multiple disciplines such as human physiology, psychology, biomechanics, nutrition, environmental physiology, strength training, and of course, coaching.

The goal of this certification is to educate students on how the body functions and how to apply this knowledge to working with runners of all ability levels.

About This Demo Course

You have 14 Day Access to the Demo course and there is no further obligation!

About Ben Rosario and Nell Rojas

A former professional athlete for the Hanson’s Brooks Distance Project from 2003 to 2005, Ben was the youngest qualifier for the 2004 Olympic Trials Marathon. He then spent a year as the special events director for the GO! St. Louis Marathon before co-founding Big River Running Company, a run specialty store in Saint Louis. During that time Ben coached hundreds of athletes of all ages and abilities and directed dozens of events including the USATF Cross Country National Championships.

Nell Rojas was born and raised in Boulder, CO where she now trains professionally and coaches all ages and abilities. She competed in track and field and cross country at the University of Northern Arizona where she earned a B.S in Exercise Science and won numerous conference titles in the steeplechase and 5k. After college, she tried her hand at being a professional triathlete before retiring to go back to her roots of running. She won Grandma’s Marathon in 2019, went on to finish 9th at the Marathon Olympic Trials, and was the first American to cross the finish line at the Boston Marathon in 2021 and 2022, putting her in 5th and 10th place, respectively. She is now training to earn a spot on the 2024 Olympic Marathon Team.

What Areas are Covered in the Demo Course?

What’s Included in the Full Certification?

What Will You Achieve in the Full Certification?

Are you ready to become a UESCA Certified Running Coach?

Register for the Full Certification

Stay Connected With Us

Sign up and be alerted about our latest course offerings.